Keeping Birds Off Your Aerial

There’s nothing wrong with the occasional visit from the local wildlife, but birds and aerials are not my favourite combination. In fact, there’s been a number of cases where I’ve actually had to abandon an installation because some birds had nested nearby and were pulling an Alfred Hitchcock on me while I worked.

In some cases, birds will nest inside the aerial itself, which can lead to a wide variety of issues (some unpleasant for the homeowner, some unpleasant for the bird). In the interest of natural harmony, I’ve come up with a few suggestions on how you can keep birds away from your aerial and – quite literally – out of your technician’s hair. 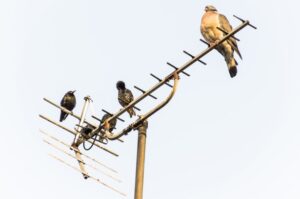 You Can Try “Bird Spikes”

An easy, cheap, and fast approach to dealing with a bird problem is to consider investing in bird spikes. These are metal or plastic fences that you can attach to your roof or place in the area around your cables, antennae, or aerial. Despite their name, they don’t really hurt the birds. They just make it very uncomfortable for them to perch or land in the area. Depending on the size of the birds that are accosting your roof, you’ll want to make sure you buy the appropriately-sized spikes.

I also recommend putting a few cable ties on any part of your aerial setup that might look perch-worthy to a bird. Once in place, they will also make it very uncomfortable for the birds to walk around on your boom, back reflector, etc. Though these will be cheaper than the spikes, you will have to use quite a few of them to achieve the effect you want.

I should note that bird netting is quite possibly the most effective option for keeping birds away from your aerial. However, it is also one of the priciest. It consists of a simple net made of mesh, nylon, or even plastic that you position over the area you’re trying to protect. Providing it’s installed correctly, it should be able to block birds from entering the area at all, let alone nesting. Aside from the cost, of course, you have to consider that the netting will be visible from the ground, and you may need to set up posts on your roof to keep it in place.

These extremely hospitable bird deterrents have become incredibly popular in the past few years, particularly around car lots and other outdoor showrooms. In essence, these are kites that you can attach to your roof or somewhere nearby. Like scarecrows for the sky, they will blow around in the wind and mimic the motion of a predatory bird.

If you find yourself particularly reluctant to cause the birds on your roof any discomfort, this is obviously an excellent choice. However, these kites are not suitable for use in high winds, with anything over 40 kph likely to send it flying for real. There is also some maintenance involved. After all, birds won’t be fooled forever. This means you’ll have to move the kite on a fairly regular basis.

Though not exactly common nowadays, people used bird deterrent statues throughout the 1800s and 1900s. Like the hawk kite, these are fairly-realistic looking owl or eagle statues that you place up near the aerial antennae. Thinking that there is a predator stalking your roof, the birds are sure to keep away – maybe. Actually, while I’ve seen this work at times, I’ve also seen birds build a nest right next to them.

Nobody likes to give Mother Nature the satisfaction of winning. That said, sometimes, simply moving the aerial can make the bird problem a complete non-issue. For instance, if you’re in a place with a relatively strong signal, you might consider putting your aerial in the loft, which will prevent birds from getting to it while also keeping it out of sight. If you’re only concerned about droppings, and not the nesting itself, you can consider moving the aerial to your chimney to isolate the bird mess.

Install Aerial onto Crank Mast Over the Roof

Another option to consider is installing your aerial on a crank mast rather than a straight mast. The former will have a bend in it and help keep the birds from perching over your paths, vehicles, patio furniture, etc. Again, this alone won’t keep them off your aerial, but it will keep their droppings off of your stuff. The combination of a crank mast and bird spikes, however, is a nearly foolproof solution to the problem (but an expensive one as well).

Your ability to utilize a crank mast will depend on how much roof space you have as well as which direction the TV transmitter faces. There are a number of models out there, but I suggest you consider one that is at least 1.25” in diameter to prevent it from snapping in the wind.

Ditch the Aerial for a Satellite Dish

If none of these options appeal to you, there’s nothing wrong with getting rid of your aerial altogether and putting up a satellite dish instead. These have the advantage of being able to be installed much lower on your home, and usually end up on walls instead of roofs. This, combined with the dish’s less-than-desirable shape, is often enough to keep birds from perching on it.

Now, from a signal perspective, there’s virtually no difference between the two options. When it comes to your provider, you should have no problem getting Freesat or Freetime, free TV services that function just like Freeview. If you want a bit extra, you might also consider investing in Sky.

Either way, dishes are certainly more understated than aerials and are far less prone to wind damage. However, how much trouble you’re willing to go to in order to prevent some birds from perching on your roof is up to you.

Read: Freesat Wideband Systems: What You Need to Know